This rich documentary gives viewers a behind-the-curtains look at the seminal Jewish-American musical "Fiddler on the Roof." Max Lewkowicz's film partners rare archival footage with firsthand accounts to chronicle the history of this timeless theatrical masterpiece. Covering the story's journey from book to stage to screen to worldwide acclaim, Fiddler: Miracle of Miracles will help you appreciate more than ever the musical that has become such a tradition for families across the globe. This film is rated PG-13 and it WILL compel you to sing the entire soundtrack on your trip home.

Reel Talk: After the film, stay with us for a Q&A with Broadway actress Alexandra Silber, a subject in the documentary who will join us via Zoom for a wide-ranging discussion of Fiddler on the Roof. An internationally trained performer, Alexandra Silber is a veteran of Broadway and the West End, and in 2016 completed a run on Broadway as Tzeitel in the Tony-nominated revival of Fiddler on the Roof. In 2017, she published her debut novel After Anatevka, chronicling what happens to the Fiddler characters Hodel and Perchik.

Admission to Friends Friday Films is open to all at no charge. Showtime is 7 pm. Doors open at 6:45 p.m. All attendees will be required to wear face masks (regardless of vaccination status), per the Town of Greenwich. Assisted listening devices are available.

This series is made possible by contributions from the Friends of Greenwich Library.

If you have questions about this event, please contact the Friday Films Coordinator Chelsea Gibbs at cgibbs@greenwichlibrary.org. 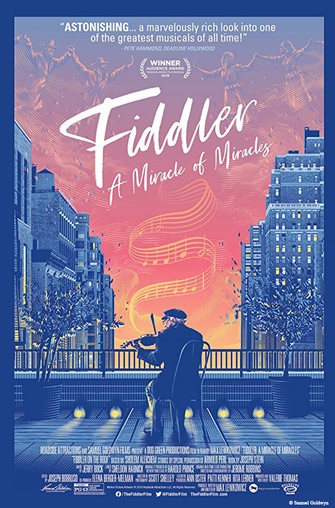